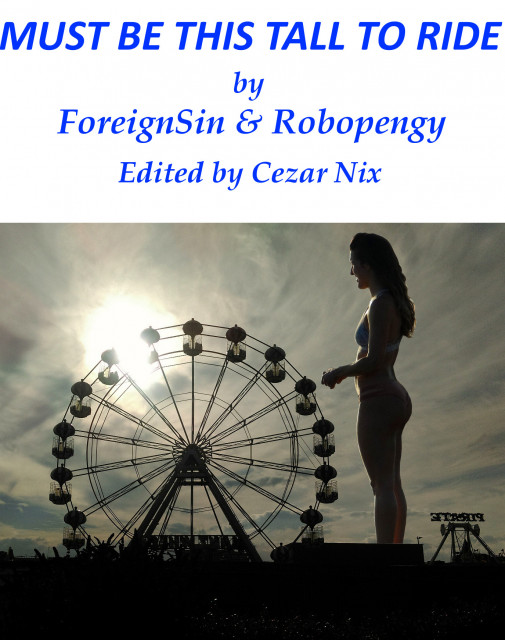 Must Be This Tall to Ride

An amusement park gets a BIG new attraction!

Marlie isn't happy. Despite graduating college, everyone treats her like a kid. Her dead-end job and flat physique don't help. So she really didn't want to be dragged along with her family to her father's workplace, even if it was the Funfair. However, a mysterious growth spurt is about to give her a new point of view...from really far up! Appx 12k words. Contains growth, giantess, mega giantess, destruction, breast expansion, ass expansion, clothes ripping, beautification. File contains RTF, EPUB, and PDF formats.

Since she was all alone at the edge of the picnic area, no one was around to see or care that Marlie was beginning to grow.

It started just a few inches at a time. A light sweat dripped down Marlie’s skin as she pushed up from the ground, little by little, like sped-up footage of a sprouting plant. Her eyes darted to and fro, beseeching the people in the distance, but no one was close enough to notice her.

She felt as much as saw her limbs flex and stretch and begin to grow outward. Her fingers popped and crept downward, even as she twitched in discomfort. Her legs burned as if from sprinting as they lengthened like a piece of twine unraveling from a ball. Rather than stretching as if she were made of taffy, she retained her proportions; to an onlooker, it might have seemed as though a camera was zooming in on her.

Marlie wobbled on the spot and opened her mouth, emitting a litany of soft moans and gasps. She struggled to catch her breath, but it only grew more ragged. It worsened as the growth grew in intensity. She started growing farther and faster, pushing out in all directions like bread baking, rising from the heat.

Soon the once five-foot-nothing girl had shot up to six feet. With a prettier face, and perhaps not caught up in her inexplicable predicament, Marlie would have been perfectly equipped to be a model with her height, slenderness, and lack of curvature. That idea might have excited her if she hadn't found the situation so alarming... or if it had stopped then and there, giving her time to adjust to being that tall.

Of course, that wasn’t what happened next. The growth kept going, and soon Marlie was shooting past her ideal six feet and into seven, and then onward to eight. She’d already outgrown some of the smaller trees before the effects of her transformation started to take a toll on her clothes.

Her once-loose clothes felt like they were shrinking. The areas where they had fit the best to start with were almost unbearably tight. The baggy legs of her jeans were rapidly tightening on her thighs and calves; her oversized T-shirt was becoming undersized, digging into her arms and chest. The strain on the stitches was quickly becoming so severe she could actually hear the fabric making small sounds of distress...