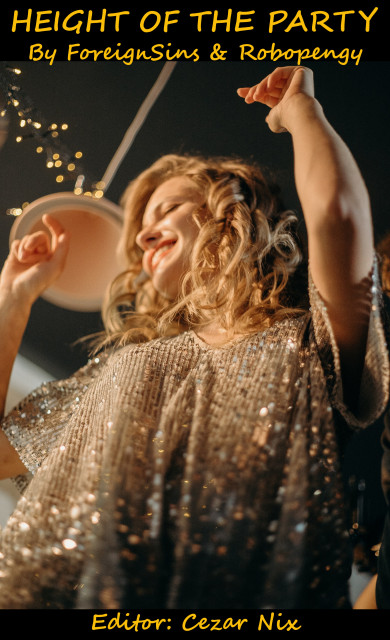 Height of the Party

In the middle of a crowded party, one woman will RISE to stand out!

It's another ordinary night for Rosie: heading to a friend's house for an evening of dancing, drinks, conversation, and fun. She's dressed to kill and ready to have a good time - but she didn't expect a sudden, sensual transformation into a curvaceous mini-giantess! Now that she's busting out of her sexy outfit and her libido is cranking into overdrive, she's sure to be the center of attention...

Her expansion became more dramatic from there. It was gradually speeding up, and suddenly Rosie was nearing seven feet tall. Her dress was riding up dangerously high. The fabric was straining, stretched nearly to its limit and tugged tight around her hips and legs. She could feel the hem digging into the soft flesh of her upper thighs. They had widened along with her ass and hips, and as a result they had quickly stretched the bottom of her dress as far as it could go. Rosie's whole situation was uncomfortable for several reasons, but the bite of the material pinching into her skin only made things worse.

This was especially true for her poor feet, which had grown along with the rest of her and were now tightly bound in the confines of her red party heels. Her toes were folded over each other, bulging from the tiny opening at the top of the shoes, turning dark red at the tips and bone-white where the edge of the shoes was cutting off her circulation. The straps and edges dug into her feet, making her feel like they were cutting her as they pressed into the engorging flesh. She could feel the heels quivering, threatening to give out under her increasing weight.

The upper part of her dress had also been stretching, and by this point it had been dragged across her elongated torso, pulled taut by her widening shoulders and practically shrink-wrapped over her enlarged breasts. Her decision not to wear a bra meant that the outline of her nipples were visible through the thinning, straining fabric. Only the curve of her neck straps was still keeping the material in place over her engorged melons. The window of the dress seemed to creep downward, widening and spreading down as it was distended by her growing frame. Her figure had so distorted the dress that it looked to be of a completely different design now, the sort with a deep v-shaped neckline. The crowd could easily see the rounded tops of her tits as they slowly but surely rose higher and higher over the top of the dress.

Rosie got bigger and bigger, further filling the couch. Soon, her hips expanded enough to put pressure on the sofa's other two occupants. The guy to her left jumped up suddenly, avoiding being pinned between Rosie's widening waist and the arm of the couch; Veronica did the same on the other side. She stared at Rosie in shock as she stumbled back to join Lucy, who had also come to gather in the living room when everyone had stopped dancing and talking. Now there were just people huddled around, looking on in amazement or horror as bass pounded in the background and Rosie expanded over the couch.