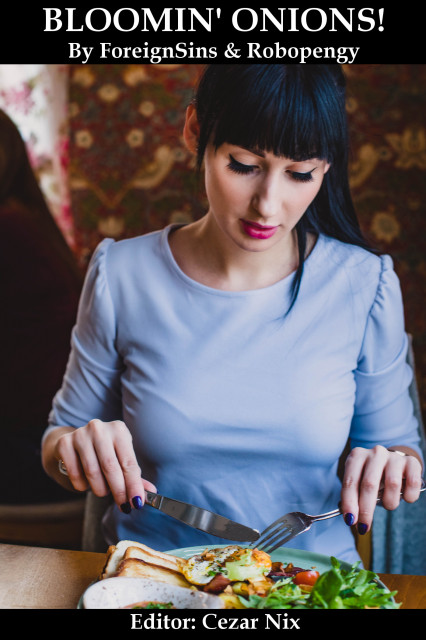 An unusual food allergy causes Talia nothing but BIG trouble - and it keeps getting bigger!

Like millions of people, Talia has a food allergy. If she eats onions, she swells up. However, in her case, it's the kind of "swelling" that turns her into a curvy mega-giantess prone to accidental devastation! A particularly embarrassing incident in her past led her to pack up and move to a new town, where she hoped to escape her reputation - but one slip-up with a fast food cheeseburger is about to cause her some MASSIVE problems!

She’d been wearing jeans and a t-shirt, the kind of comfy, loose-fitting outfit perfect for a casual dinner with friends. However, in seconds, they were binding snugly against her skin, stuck to her like she was made of pure static. But she wasn’t electric – she was just filling up the available space, becoming too large for her garments in the blink of an eye.

“What kind of fries are these?” Her words had been too loud, too frightened. Her outburst all but silenced her companions. Years later, she could still feel their eyes all turning on her. Feel how their gazes shifted from confusion and concern to fear and complete befuddlement as they saw her growing into the tallest member of the group.

One of the others had replied, “Um...I think it's a fried onion.”

Talia had only been able to moan in reply. Then her tits had erupted through the flimsy fabric of her t-shirt and she had suddenly doubled in height so the seat beneath her back became like a child’s activity chair. The fibers of her shirt had started to shred, to tear down the splintered lines as if nails were yanking the fabric apart. In truth, it was her own flesh, growing so broad and voluminous that it filled the material and forced it apart. The button on her jeans popped off and flew into a neighboring table's bowl of potato soup.

Her friends had frantically asked what was happening as they’d backed away from the table. But Talia could not respond, could only grunt as her jeans split down the seams only enough to lock her further into place, only enough for growing hips and legs to push and for skin to bloat enough to become trapped in the fabric like ropes. She couldn’t stand to run or bend her knees to fall onto them – she was frozen, helpless. At least until the stitches on her jeans started to pop in a rapid staccato burst of sound. Pop, pop, crack!

Growing rapidly, her shoulders had hit the overhead light at the same time. The lights flickered, since all of them were connected. Then the one above her swung back against her neck and shattered and went out. Darkness filled the room for a moment before the backups kicked the other lights back on. Then the bright of the restaurant felt like spotlights. Everyone was looking. The screaming started, just like at prom. She was a monster, a disaster happening rather than a girl at an outing. Her friends’ eyes had been wide and terrified.

Crack, snap, pop! Her jeans ripped up the sides one thread at a time until the pants were splintering like her shirt had. Her bra could barely contain her heaving chest. Her nipples had grown to fill the cups that were looking more like pasties. Talia’s breath had been rapid then, escalating, arousal warring with panic inside her, but more terrified than anything. Afraid of breaking everything, of being left bare, of being left alone in her shame.