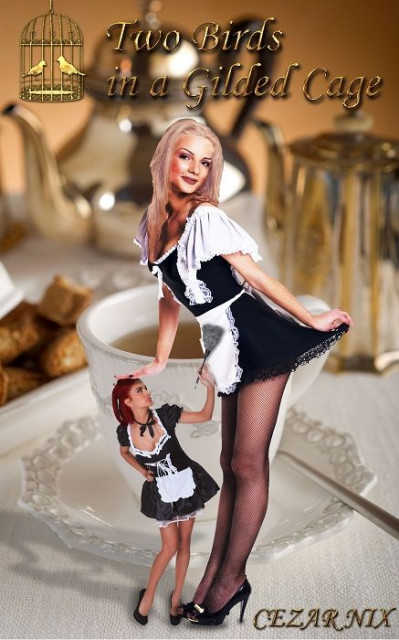 Two Birds in a Gilded Cage

Kelly and Jennifer think they'll get the story of a lifetime when they disguise themselves as maids and sneak into the home of reclusive billionaire inventor Duncan Alexander. However, when they're caught red-handed, they find out the hard way about his newest invention: a shrink ray! Suddenly, they find themselves doll-sized captives of their would-be target. Duncan is willing to let them go...but first, they're going to have to make it up to him!

The next couple of days passed with little incident, although Duncan did insist on getting the girls used to being picked up--"to be ready for the party," he'd insisted, although both of them were well aware that he enjoyed handling them. He also had them practice carrying around small serving trays and beverages, since they'd be expected to do so at the party.

He kept up his part of the bargain, giving each of the girls a wardrobe with several doll-sized selections. There were even a couple of swimsuits included, which the women readily made use of on their frequent visits to the dollhouse's Jacuzzi. Kelly also got herself off a few more times in the tub, and didn't appear to mind Duncan recording it. Jennifer was less open to doing anything like that, but their host didn’t seem to mind as long as Kelly was cooperating.

The night before the party, Duncan, wearing a large, comfy-looking bathrobe, approached the dollhouse, smiling at the two beauties relaxing in the bubbling tub. "Okay, girls," he said, watching as they both turned to look at him. "The party is tomorrow, and there's one more thing you're going to need to be ready and willing to do, so I thought we'd practice tonight."

"Oh, boy. What did you have in mind this time?" Jennifer asked, rolling her eyes at Duncan.

"Well, he can't possibly want us to do coat checks," Kelly said with a smile.

"I think I'd rather just show you," Duncan replied. "Please get out of the tub and dry off." He watched as they complied, his eyes lighting up when he saw what they were wearing--Kelly had selected a black bikini, and Jennifer wore a revealing one-piece that accentuated her breasts. "Those swimsuits look great on you, by the way."

"Thanks," Kelly replied. "It's nice to have them."

"Oh, like you wouldn't have gotten in the tub naked again," Jennifer said, sticking her tongue out at Kelly.

When the two of them were dry, Duncan grabbed one in each hand and carried them across the room and sat down on his bed, swinging his legs up onto the mattress and setting the girls down beside his seated form.

Kelly was amazed at how the material of the mattress felt beneath her feet--spongy and giving, although her miniscule weight didn't depress it much. She flopped down onto her back and stretched out. "Oooh…comfy. You should try it, Jenny."

"I'm a little too concerned what our host has in mind for us to really relax right now, thanks," Jennifer replied, looking warily up at Duncan. "So, what are we doing here?" she asked him, although she had an unpleasant suspicion.

Duncan confirmed her fear a moment later when he untied the robe and let it fall open, revealing that he wore nothing beneath it. He was already standing partially at attention, presumably from having his hands on the two half-naked women.

Jennifer's eyes widened as she took in the sight. "Whoa," she said at last. "That's…"

"…really big," Kelly finished for her, sitting up and staring open-mouthed at the rising column of flesh.

Duncan smiled down at them, watching their reactions. "Why, thank you," he said, his grin spreading wider. "Now, what I'm going to need you girls to do is get me off."

"Wha…seriously?" Jennifer asked incredulously, still staring in disbelief. He was mostly erect now, and she guessed that when he was completely hard, his manhood would stand as tall as her shoulders.

"Well, not that I'm casting aspersions on your virtue or anything, but I assume you have seen a penis before, right? I mean, you know how to bring a man to orgasm, don't you?" Duncan asked her, raising an eyebrow.

"I mean…yeah, of course, but…" Jennifer trailed off, looking stunned. "What do you expect us to do with…that? It's almost as big as we are! It's not like either of us can fit it in our hands or mouths!"

"Or anywhere else," Kelly added, unsuccessfully trying to stifle a giggle.