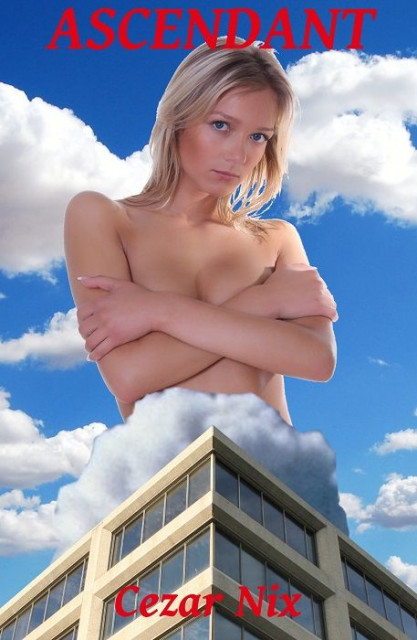 Lisa Grant was suffering through another dull day at the office, staring longingly at her coworker crush Mack. But after a visit by an angry ex-employee, Lisa is dosed with some strange chemical. Soon, she finds her desire for Mack growing, along with a few other things...

He turned and left the room, leaving Lisa alone with her thoughts, which were still mostly remarkably filthy fantasies about Mack. What the hell? she chided herself. Get a grip, Lisa. Her nipples were still stiff, and seemed to be straining against her bra cups. She could also feel a familiar wetness in her panties. Jesus. All he did was hold my hand. Feeling warm, she pulled off her pink sweater. She was trying to relax and calm her raging hormones when she felt a strange sensation of something brushing against her, as if the chair had moved under her.

“What the hell was that?” she said, hopping up from the chair and looking down at it. Nothing seemed unusual or out of place; it was just an empty chair. Before she could sit back down, she experienced another strange feeling: her clothes pulling against her body, as if they were too tight. She tried to smooth them out, but the feeling wouldn’t go away. In fact, the more she moved around trying to ease the feeling, the worse it got, her blouse constricting around her chest and her capris hugging her legs too snugly. Even her underwear felt uncomfortable.

A sudden chilly tingle swept over her nerves, and she shuddered and rubbed at her skin. Something felt odd about that, too, and in a moment she realized what it was: the sticky patches of orange goo had vanished from her skin, as if they’d evaporated. But if that’s the case, why is that stuff still all over my clothes? Another tingle ran over her, and she felt a curious shifting sensation. Her clothes tightened again, especially around her chest, and the fabric of her bra set off another pleasurable jolt from her nipples. She glanced down at her chest, and her eyes bulged.

“Oh my God!” Lisa cried. The buttons of her white blouse were straining to separate, gaps starting to show where the fabric was trying to pull away on either side. Nowhere was this effect more noticeable than over her breasts, which were swollen significantly. Lisa normally barely filled out a B-cup, but what she was sporting now was easily a C, and might even be a D. Lisa rubbed her eyes, and then she rubbed her engorged tits; both actions confirmed that what she was seeing was real. The soft, fleshy orbs under her hands didn’t feel bruised or painful in any way--they just felt like a nice, healthy pair of jugs. “What the fuck? Was that orange stuff some kind of Miracle Boob Grow or something?” she said. “Not that I’m complaining…”