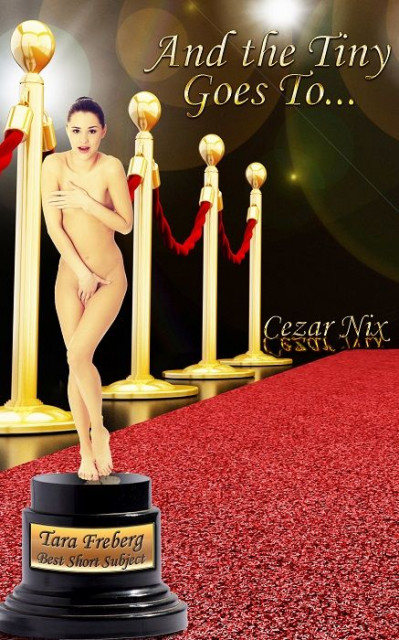 It's time for the VMAs, and pop star Lizzy Ellis is excited. Not just for her nomination, but because she'll have a chance to try out her new magic potion on a sexy journalist, shrinking her to doll-size for a weekend of fun. When another hottie catches her eye, it's double the pleasure...but a magical mishap makes her evening spiral out of control!

The interview proceeded normally for a few more minutes, but soon enough Elizabeth could see that her concoction was having an effect on Tara. The interviewer started fanning herself and flipping her hair off of her shoulders. She also began to fidget in the chair. Amused, Elizabeth smiled at her. "Something wrong, Tara?"

"No…nothing," Tara replied. "Just…is it just me, or is it hot in here?" She fanned herself again.

Elizabeth shrugged. "Feels fine to me," she said noncommittally.

Tara grabbed the collar of her shirt and flapped it a few times. "I swear I've been feeling really warm for the past few minutes." She flapped her shirt again, and Elizabeth noticed the garment looked slightly looser than it had been minutes ago.

"Maybe you should take off your jacket," Elizabeth suggested helpfully. She leaned slightly forward in her seat, eager to see the payoff of her little experiment.

"Good idea," Tara replied. She shifted around in her chair, shrugging out of her leather jacket. It definitely looked somewhat bulky on her, the cuffs past her wrists even before she pulled her arms into the sleeves, and when she extricated herself from it, the short sleeves of her shirt shifted around oddly on her shoulders, giving the distinct impression the shirt was too big on her. Tara adjusted her glasses on her nose and returned her attention to Elizabeth. "So, I've heard rumors that you had some creative differences with the director of the music video for 'Black Stallion' - what's the story with that?"

"First of all, those rumors are highly exaggerated," Elizabeth replied. She continued with her answer, but she was only dimly paying attention to what she said; most of her concentration was on trying to watch Tara for changes without being too conspicuous. As the back-and-forth between the two continued, Elizabeth caught small signs of what was going on.

Tara had started the interview in a relaxed pose in the chair, her feet well ahead of her on the floor, but her shoes kept inching slowly backward and she was sitting increasingly straighter in the chair. Despite this change of posture, she didn't look any taller--in fact, if anything, she appeared slightly shorter than when she had sat down. Her shirt was looking bigger and bigger on her, and more than once she'd had to pull its sagging collar up from her shoulders, looking embarrassed when she realized a bra strap was exposed. She also kept fanning herself, and mentioned the apparent heat in the room a few more times. Her jeans were no longer clinging to her thighs and hips like a second skin; they now looked slack, the material draping loosely around her legs. She fidgeted with her glasses again and again, appearing to have continuous trouble getting them to sit right on her nose. The longer Elizabeth watched, the more pronounced Tara's changes became.

Elizabeth blinked, startled. She'd become so lost in her reverie that she hadn't heard Tara's last question, and she belatedly became aware that Tara was sitting there in an awkward silence.

"Hmm?" Elizabeth said, blushing faintly. "I'm sorry, Tara, I was a lost in thought for a second there. What did you say?"

"That's okay," Tara said with a smile. "I'm sure you have a lot on your mind. And you must be nervous, since you're up for Video of the Year tonight." She flapped her loose top again, not noticing that its collar fell low enough to tease the top of her blue bra's cups when she let it go. "I was asking what you could tell me about Going for Broke. Your Hollywood debut is a big deal!"

"Oh, right!" Elizabeth said cheerily, trying to force herself to pay a little more attention to the conversation. She started to discuss her role in the upcoming romantic comedy, but she soon realized that this time, Tara wasn't paying attention. The interviewer was looking at Elizabeth, certainly, but there was a faraway look in her eyes, she was chewing her lower lip, and one of her hands had fallen into her lap, its fingers subtly curling and sliding against the fabric of her jeans in a repetitive motion that suggested her mind was in a very interesting place.

Trying not to betray her amusement at the situation, Elizabeth carried on talking like she hadn’t noticed anything, but she decided to have some fun with Tara. "And, of course, my character has a nude scene," she said, a mischievous gleam in her eyes.