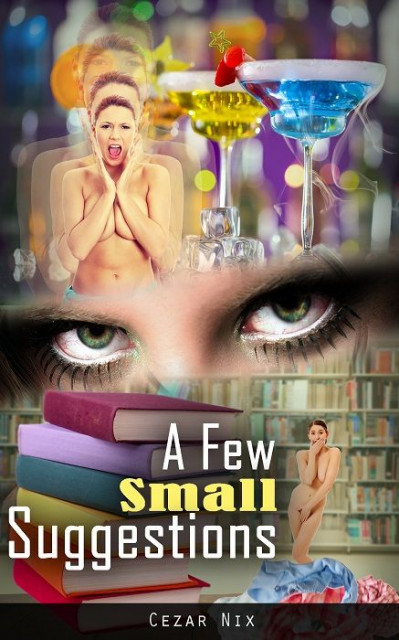 When she agreed to do a nude photoshoot with her free-spiritied roommate Piper, Brenna didn't realize that their photographer, Sigrid, was also a world-class hypnotist. With a simple word, she could lower their inhibitions, crank up their arousal, or even make them believe they were shrinking to the size of dolls. What the girls don't know, however, is that there's more to Sigrid than meets the eye. Now, they're about to get a real-world lesson in the power of suggestion!

“What I want to know is how we ended up getting undressed,” Brenna said. “I mean, obviously, people don’t really shrink, so how did our clothes come off without us realizing we were doing it?”
Piper shrugged. “Sigrid’s hypnosis is really powerful. Every girl I’ve talked to about shooting with her has said the same thing. She probably programmed us to pull our clothes down off of our bodies while we pictured them getting looser and falling off.” She grinned. “It was pretty fun to imagine that, wasn’t it?”
“I’ll admit I kinda had fun once I got into it,” Brenna replied. “But I’m still self-conscious about this. You know a nude photoshoot isn’t something I would normally do...and especially not one with...you know…”
“Girl-on-girl action?” Piper said, smiling slyly. She was amused to see Brenna turning red.
“Yeah. Exactly,” Brenna said. “But I just couldn’t say no to the price tag they were offering. And you’re sure this Helsdottir thing is private and secure?”
“Absolutely,” Piper replied. “Out of curiosity, and because I knew you’d ask, I did a lot of digging to see if I could turn up any of their copyrighted stuff online. Nada. Whatever they’re using to fight piracy, it’s really good.” She snickered. “So you don’t have to worry. Those pictures of you making out with me while wrapped up in your own giant panties aren’t going global.”
Brenna turned even redder, if that was possible. “That was...really something,” she said hesitantly. “I...I hope you’re right and things won’t get weird between us now.”
Piper scoffed. “Please, girl. I’ve seen you naked enough times around the apartment already. And I know you’re into guys.” She raised an eyebrow mischievously. “Not that I couldn’t get you to switch teams if I really wanted to.”
“Hey, easy to hypnotize doesn’t mean just plain easy.” Brenna stuck her tongue out at Piper. “Oh, wow. Here’s a scary thought. What if we left here without getting deprogrammed? I mean, our triggers aren’t the most common words in English, but what if we just happened to hear them? We’d end up God knows where, uncontrollably horny and with no inhibitions.”
“Sounds like me right after last call,” Piper laughed. “But that shrinking illusion would get pretty disorienting. And you’d need some alone time every time you heard the word ‘beg--’”
“Hey, watch it,” Brenna said, interrupting her. “Hypnotism isn’t an exact science. For all we know, Sigrid didn’t completely remove the suggestions.”
“Oh, relax, Brenna. You’re not gonna start soaking your panties every time someone says ‘beguile.’”
Brenna twitched. “Don’t even joke about it. I’m seriously worried now.” She slung her purse over her shoulder and headed for the studio exit.
“Beguile, beguile, beguile!” Piper said with a smirk, following closely behind. “Unbridled! Obstreperous!”
Brenna cringed, flailing her hands at Piper. “Stop, Piper! It’s not funny!”
Piper shrugged. “See? Nothing happened. You don’t look any shorter than normal, and you’re obviously not super turned on and trying to make out with me again.” She grinned wickedly. “Although, it’s not too late to change your mind about going out drinking with me and the girls tonight. We could probably get you back in that state of mind!” she said as they stepped outside into the mild warmth of the late afternoon.
Brenna gave a rueful half-smile. “You know I need to study for that big exam I have on Monday. I appreciate the invite, though. Maybe next time.”
“Oh, come on. Unbridled! Unbridled!” Piper said. “No? Still nothing?” When Brenna shook her head, Piper sighed theatrically and rolled her eyes. “Oh, okay, fine. You can’t blame me for trying, though. I’ll be home late tonight. Don’t wait up for me!”
Brenna chuckled. “I think you mean tomorrow morning, and I wasn’t planning to. Have fun getting hammered and cutting...footloose,” she said, turning to walk down the sidewalk toward her parking space.
“Always do!” Piper said as she pulled out her phone, texting one of her friends to meet her at the bar as she strolled in the opposite direction.
Back inside the studio, Sigrid smiled to herself. Unbeknownst to the girls, she had eavesdropped on their conversation, and it had given her an idea that was sure to make for plenty of naughty fun.