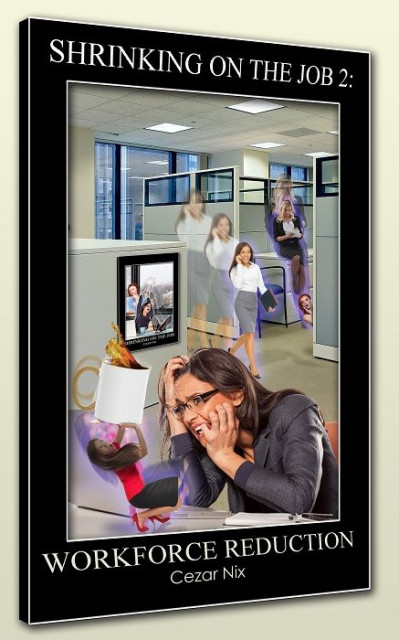 Shrinking on the Job 2: Workforce Reduction

Rachel and the gang are back for more sexy shrinking shenanigans in the office!

Rachel and Lauren are going out to dinner to celebrate Rachel's big promotion. All is going well until Rachel's magical necklace starts going haywire, shrinking both of them out of their clothes in the middle of a fancy restaurant! Everything seems to go back to normal the next day, but a few days later at work, their problems return, and they're BIGGER than ever! What's causing the necklace to uncontrollably shrink Rachel, Lauren, Taylor, and Karlie? And why are these other women at their company starting to look so small?

Despite her being accidentally shrunk by Rachel’s failed attempt to use the necklace, Taylor was still just barely the tallest of the group, so she was assigned the task of marking their heights on the wall and measuring them. She had insisted that Lauren give up her heels for an accurate measurement, and Lauren had reluctantly complied. Taylor had cast her shoes aside as well, though it made little difference as she had worn flats that day. She stood with her back to the wall and marked her own height, and then she did the same for Lauren and Rachel. Taylor stood 5’4”, Rachel’s previous preferred height and a loss of six inches from her previous size. Lauren was down from 5’8” to 5’2”. And as for Rachel…

“Oh, come on!” Rachel moaned. “This is so not fair! Why is this happening to me? Er, us?” she amended hastily, seeing the look on Lauren's face.

“You haven't been affected yet,” Lauren said. “But we wanted to let you know this was happening, so you'd know to watch out in case it does start happening to you.”

“Good point, and thanks,” Karlie replied.

“So what's our plan now?” Taylor asked, nervously tugging her capris up her hips.

“All I can think to do is contact the lady who sold it to me,” Rachel said. “Hopefully she'll understand what's going on, and how we can fix this. In the meantime, we just have to hope we don't shrink more.” The office door suddenly swung open. “Hey! Don't you know how to knock?”

The tall, willowy brunette walking in flushed bright red, the spots of color obvious against her pale skin. Rachel recognized the young woman after a moment--her new personal assistant, Stephanie. “Uh, s-sorry,” she stammered, nearly dropping the folder she held. Her eyes darted nervously behind her glasses, taking in the other three women in Rachel's office. “I, uh, didn't know you w-were in a meeting.”

“Which is why you should knock first,” Rachel said in a faintly patronizing tone. She sighed. “What did you need, Stephanie?”

Stephanie set the folder down on Rachel's desk. “I have the client files you requested earlier for your meeting tomorrow,” she said, her voice still carrying a faint tremor. “I'm sorry again about interrupting--”

Rachel waved a hand dismissively, cutting Stephanie off. “It's okay,” she replied. “Just please remember to knock unless it's an emergency, okay? I can't stand it when--” She froze as she glanced up from the folder and saw Stephanie adjusting her glasses. She seemed to be having trouble getting the thin black frames to sit right on her face, and every time she let go they slipped down to the end of her nose. Okay. Now you're really being paranoid, Rachel chided herself.

“...Are you okay, ma'am?” Stephanie asked, looking at Rachel in puzzlement.

Rachel realized she was staring. “Oh! Sorry about that. You just...uh...seemed to be having some trouble with your glasses, there. Didn't mean to stare.”

“Yeah,” Stephanie replied, taking them off and frowning at them. “It's weird. I could've sworn they fit fine earlier.” She shrugged, and then she fidgeted with the shoulder strap of her sleeveless top. “Ugh. Now this feels weird, too.” She sighed. “Sorry again about interrupting your meeting, boss. I'll be more careful in the future.” She turned around and walked toward the door, stumbling briefly and frowning down at her shoes on her way out. Rachel stared after her, as did the other three women in the office.

“Did she just…?” Karlie asked.

“No. There's no way,” Rachel protested. “She wasn't involved in any of what happened last year, and I've never used the necklace on her even once. So how could she even be affected by what's going on with us?” However, a fear that that was exactly what had just happened nagged at her.

“It really did seem like she shrank, at least a little bit,” Taylor said. “I mean, we all know the signs well enough.”

“Look,” Rachel said. “It doesn't make any sense for someone to get caught up in this...whatever this is if they weren't already involved. And even if she did shrink a little bit,” she continued, preempting the protests that she was sure were coming, “it's probably just from being around all of us and the necklace. Plus we don't know how to fix it. So even if that did happen, it didn't happen. She didn't notice, and we don't need gossip and panic flying around. So can we keep this between us?”

Karlie frowned. “Well, I agree that word getting around wouldn't be very useful,” she said. “But what if she does eventually notice?”