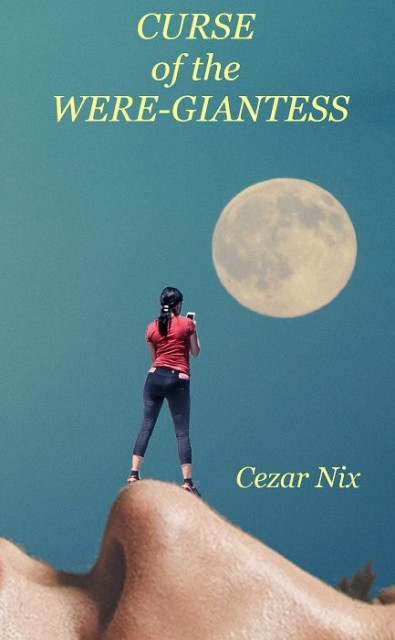 Kirsten and Lauren are very much in love, but they don't always see eye to eye. Lauren is insecure about her abnormal height and her prominent nose; Kirsten thinks those are two of her best features. A magic ring, a poorly-worded wish for Lauren to see herself the way Kirsten looks at her, and a full moon lead to some uncontrollable growth, sexy shenanigans, and a MASSIVE change in perspective!

Nothing much happened for the next few days. Kirsten tried the powdered herb, and it helped her get more rest; otherwise, her life with Lauren continued as normal.

Until the night of the full moon.

Kirsten and Lauren were enjoying delivery pizza and a campy horror movie--”both with extra cheese,” as Lauren liked to say--when Lauren started fidgeting on the couch. It was a small thing at first, but her discomfort seemed to grow with each passing minute. Kirsten finally paused the movie. “Something wrong, hon?”

Lauren frowned, fidgeting again. “I just can't seem to get comfy,” she replied. She tugged at the straps of her tank top, the motion causing her large breasts to jiggle. “My clothes feel kinda snug, too.”

“Too much pizza?” Kirsten asked jokingly. She hadn't missed the enticing movement of Lauren's tits, and kept watching as they slowly swung to a stop. Her eyes flicked up and down Lauren's body, from her auburn hair spilling down her shoulders and the back of the couch all the way down to her sock-clad feet resting on the ottoman an appreciable distance ahead of them. Lauren's tank top was clinging tightly to her smooth stomach and firm breasts, and her pajama pants looked painted onto her long, lean legs. Even her socks seemed a bit stretched over her toes. “Or maybe your clothes shrunk in the wash. Damn, girl,” Kirsten added with a low whistle.

Kirsten grinned. “Then it's definitely too much pizza.”

Lauren swatted her with a throw pillow. “Ha, ha.”

Kirsten rose from the couch. “I'm gonna grab some more wine. You want something? Maybe a diet soda?” she teased, ducking when Lauren threw the pillow at her.

“Better bring me more wine too, if you know what's good for you, short stuff,” Lauren growled.

Kirsten chuckled softly. “Be right back.” She stepped into the kitchen, humming to herself as she opened the fridge and scanned for the bottle of wine. She was already picturing a long, satisfying night with Lauren after the movie: get tipsy, cuddle, start making out, and take it up to the bedroom for a few hours. Neither of them had to work tomorrow, so they could stay up as late as they wanted, and Kirsten planned to take full advantage of that. Smiling, she grabbed the wine and headed back to the living room, but she stopped short when she caught sight of the couch.

It wasn’t a major difference, probably less than six inches, but Kirsten knew Lauren’s body almost as well as her own, and she was sure Lauren was larger than normal. She might even be bigger than she had been a few minutes ago when Kirsten had left the room; her pajama pants were clearly stretching over her legs like a sausage skin, her socks looked too low on her ankles and too small on her feet, and her tits looked ready to spill out of her top, her nipples clearly visible through the tight fabric and the straps biting into her shoulders. Lauren was fidgeting with her clothes even more now.

Her Amazonian lover stopped her struggles for a moment and looked up at Kirsten. “Fine, except for these damn clothes. I mean, I’m feeling a little warm, maybe, but not in a bad way.” She grinned at the wine bottle in Kirsten’s hand. “Ah, good, you brought it. Maybe if I get good and hammered I can forget about my outfit...or even take it off.”

“I like the sound of that!” Kirsten said enthusiastically, licking her lips. “Wait, no, hang on. Look, something is wrong with you. I don’t quite know how to say this, but…”

“Wrong?” Lauren asked, frowning. “What do you--ow!” she yelped, clawing at the strap of her tank top. “Jesus, what’s wrong with this thing?”

Kirsten’s eyes bulged. As she watched, she could actually see Lauren swelling slowly bigger, her body expanding on the couch, her feet stretching slightly further and creeping over the edge of the ottoman. A seam somewhere in her pants creaked ominously, and her socks slid even lower on her ankles.

The strap Lauren was tugging on suddenly snapped loudly, tearing away in Lauren’s hand. “Dammit! Cheap tank top!” she snarled. “I do feel a lot better, though…”