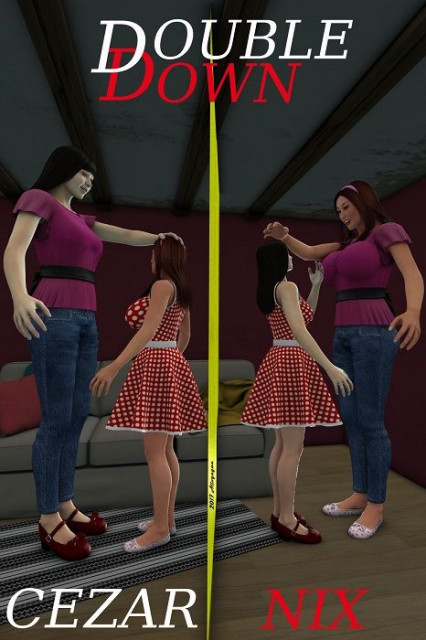 "Brought to Heel" - Amazonian Mindy loves to lord her height over her short-but-stacked roommate Tina. When Tina receives a special pair of heels that make her look an awful lot taller, Mindy figures that something is up. But when she tries the heels for herself, she learns the hard way about taking things that don't belong to her...

"Two Down, Two to Grow" - Alexis is putting in long hours finishing her shrink ray, much to the annoyance of her tall, sexy girlfriend Shauna. Shauna is even more annoyed when an accident exposes them to the ray, shrinking them both to just a few inches in height...and leaving her the shorter of the two! Can they make the long trek through the garage and up Alexis' desk? And will the malfunctioning machine bring them back to normal, or leave their relationship in an altered state?

Almost exactly two hours later, Shauna returned to the garage to find Alexis eagerly typing away on her laptop, her eyes bright behind her wire-rimmed glasses. “Dinner’s almost ready, lover. Time to take a break.”

Shauna stepped closer to the desk. “Don’t say I didn’t warn you…”

“Huh? What did you--hey!” Alexis squealed in protest as Shauna scooped her up out of the chair. “Put me down, you...you big bully!”

“I said I’d pick you up and carry your ass to dinner, and I meant it!” Shauna replied, laughing.

“Come oooooonnnnn!” Alexis said. She struggled, but it was futile--her girlfriend’s significant size advantage made her impossible to resist. “Put me down!”

“Are you trying to get me to spank you, little lady?” Shauna asked playfully. “Because I’m leaning towards it if you don’t cooperate.”

Alexis’ cheeks burned. She liked a good spanking administered by Shauna sometimes, but she had business to finish. “Please?” she begged. “One minute. I swear that’s all I need.”

Shauna puffed out an exasperated breath. “Fine,” she said reluctantly, lowering Alexis to the ground. “One minute. I’m gonna time you.” As Alexis ran quickly back to her spot behind the desk, Shauna stood near the laundry room door, tapping her foot and staring at the display on her phone pointedly.

Alexis furiously tapped keys, setting up a test. She already had the ray aligned to point at her test object--an apple sitting on a stool in the corner of the garage. All she had to do was enter a few more commands and set the timer…

“Time’s up!” Shauna said, walking briskly back towards the desk.

“No, wait, I just have to set the timer!” Alexis wailed. As Shauna reached down to pick her up again, Alexis jabbed the Enter key on her laptop, starting a countdown timer. When it expired, the ray would fire at the apple. As eager as she was to see the results, her theories suggested the apple could take as long as fifteen minutes to finish shrinking; she knew Shauna wouldn’t wait that long, so Alexis would just have to wait until after dinner to check on it. Of course, that was assuming it worked at all, but she had high hopes.

As Shauna slung Alexis over her right shoulder, she heard a steady hum from the machine. It quickly grew louder as she headed for the door, and she stopped for a moment, turning her head to the left to look at it with curiosity. “What’s it doing, babe?”

“It’s powering up,” Alexis replied. “I put it on a countdown timer before its initial test fire, but I think it’s just charging. According to my calculations, it may need to do that for up to three minutes before it--”

There was a sudden, loud burst of noise that sounded like electricity sparking, and a blinding white flash of light briefly filled the room. “Aaaah!” Shauna cried, holding up her free hand to cover her eyes.

“--fires,” Alexis finished, her stomach lurching. She had to blink her eyes several times before she could see again. She was still slung over Shauna’s shoulder. Everything looked the same as it had moments ago. “Shit,” she continued. “Well, at least I had it aimed at the apple. We should be fine.”

“Should be?” Shauna asked nervously. She set Alexis down, meeting her eyes with a look of panic. “Should be?”

“I mean, we’re definitely fine,” Alexis said. “The ray was totally aimed at the apple over there in the corner. Couldn’t have hit us.”

“I hope you’re right, or I’m definitely gonna spank your little ass,” Shauna said darkly. “And you won’t enjoy it this time.”

Though Alexis had confidently assured Shauna that they weren’t exposed to the ray’s energy, she still had a nagging feeling of doubt. That flash had been unexpectedly bright, suggesting the ray gave off more energy than she had anticipated. And what if she’d had it calibrated wrong or something? Her doubts gradually waned as Shauna put food on their plates and served the meal--chicken alfredo, garlic bread, and a delicious white wine. By the time they were mostly finished with their dinner, it had been nearly thirty minutes, and Alexis breathed a sigh of relief, sure now that they definitely hadn’t been exposed.

Alexis had the warm, fuzzy feeling of a slight buzz by the time dinner ended. That plus the mental and physical strain of spending all day in her workshop had her feeling a bit drowsy and disconnected, and she was looking forward to checking on her test before having a hot shower and a good night's sleep. She perked up slightly when Shauna brought out fluffy, moist red velvet cake. “You're too good to me, babe,” Alexis said, happily scooping up a bite with her fork. She looked up and smiled at Shauna, nudging her glasses up her nose when they slipped down to the tip.

“I know,” Shauna replied around a mouthful of cake. She fidgeted in her chair, looking slightly uncomfortable. “But if I pamper you enough, you'll keep me around until that big brain of yours makes us rich,” she added, winking.

“Ah, so you only love me for my mind!” Alexis said, pointing her fork accusingly at Shauna. Her glasses slid down again, and again she pushed them up, annoyed when they wouldn't stay and kept returning to the tip of her nose.

“And your cute little ass! Don't forget that!” Shauna replied teasingly. She scooted forward in the chair, frowning down at it in puzzlement. She adjusted a strap of her tank top and returned to her cake.

Alexis grinned. “Like you'd ever let me.” Her disobedient glasses fell off her nose completely, swinging down to bump against her mouth. She groaned in frustration, setting her fork down so she could pull her glasses off and examine them.

“Something wrong, sweetie?” Shauna asked. She reached up to tug the strap back into place again, and she stared at the fork in her other hand, adjusting her grip on it.